I received your kind letter by mere chance (as) the letter was directed perfectly correct but I had never rejoined my Company. I was struck off on the Staff in the beginning of 1855.
I was sorry to hear by its contents that poor Agnes was no more, and that grandmother and Ebenezer were also gone.
Dear mother, I have no doubt my going away hurt poor Agnes and yourself very much, but when I went, I never expected I should be a soldier, although I have never regretted being one; your son to be uniform-if only you saw me. I have been very fortunate since I joined the service in fact I am better off in many respects than if I was at home.
You mentioned that you sent a letter to me by a gentleman coming out to India, but I never received it; I really wondered when I got your letter how you found me out. I know it was wrong of me in never writing to you, but dear mother I put it off and put it off until I actually got ashamed of myself; but dear mother I often thought of you, Agnes and Alexander, and of  the many good advices that you all gave me and often think of them now, although far away from you. 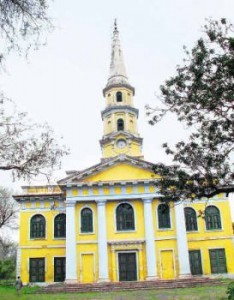 Dear mother, I daresay you will be surprised to learn by this, that I am a married man. I was married on Thursday the 7th of August last at St Johns Garrison Church, Meerut, to a Miss Rebecca KIRKHAM, an English girl. Her brother is Staff Sergeant of the 1st Troop, 1st Brigade Bengal Horse Artillery lying at this station. She only came from England last February with Lieutenant DOUGLAS (belonging to the Artillery) and Mrs DOUGLAS, who were home on furlough and were returning to India. Her brother wrote for her to come out with them, Mr DOUGLAS being his father in law. I knew her brother long before she arrived; I saw her first at a Ball in our Sergts Mess two or three days after she came to the Station and on the tenth of July I popped the question, was accepted, was married on 7th August at 10 o’clock in the morning by license.
Our wedding went off very well, it was held in the bungalow of Mr Conductor HOLMAN who is the same department as myself, his bungalow being away from the barracks. Just as we were going to the Church, my Commanding Officer, Colonel HOGGE sent his gardener with a large basket of flowers out of his own garden for the occasion and as we were leaving Church, the ground was all strewed with flowers by the natives. We had a nice quadrille party at night and by the kind permission of Colonel Hogge, who is also in charge of the Artillery band, we had the band for the occasion; a thing never had been granted before. We are much the same age, she is about 3 months older than I am, but she is such a pleasant little lady I am sure you would like her if you saw her, and we are very happy together; she often wished me to write to you, although I never done it.
We have a very nice home, three large rooms and a bathing place outside and everything very comfortable.
I am in a nice situation in the Artillery Regimental School of Instruction. A Sergeant on the Staff of the Headquarters of the Regiment, and neither belong to a Troop or Company. My Regimentals are superfine blue cloth, broad red stripe down the pantaloons, gold laced shoulder knots and cap. I never require to wear them except on the 1st of every month and on Sundays to go Church. I do not require to go the same as the other men, but I have always gone every Sunday, and sometimes at night. Dear mother, you should think it very strange to go to Church the same time as we go. In the summer we go about 4 in the morning and we are going at 7 just now; but there is great difference from what it is at home.
The cholera has been raging dreadful throughout this country; it was very severe in this station, Agra, Lahore and Umballa, but it has gone away just as sudden as it came. We are very busy just now (this being the commencement of the cold weather) getting ready for the annual practice and we expect the Commander-in Chief here in a few days more, so we shall be very busy this year. I will let you know all the particulars in my next letter, for you may expect one every mail.
The Mail leaves here tomorrow, so I have no time to say more at present; there are only 2 every month and they are very uncertain.
I trust this will find you enjoying good health-health likewise Alexander, and the children George, Ann and Agnes-(they) must have all grown very much by this time. Give them my fond love and kiss them for me, and tell them their uncle is not a soldier the same as they see at home, but they would scarcely know him from a n Officer. Give my kind love to Ann IMRIE, her mother and my cousin Alexander; also uncle ADIE, James and Kate and let Aunt Agnes know that I am doing well.
Dear mother, since I have been in the Service, I have never found it a hard life as some have, for I have always acted honest and straightforward in everything that my duty called me to do, and have the respect, confidence and esteem of any Officer for it.
Dear mother, I can say no more at present, but remember me to all inquiring friends and old acquaintances. Beccy sends her kind love to you and will write to you in my next letter. She often talks to me about you and says she would so much like to see you.

This leaves Beccy and I enjoying perfect health, hoping it will find you the same.

With fond love my dear mother.

Believe me to remain your affectionate but erring son

Editors Note : Both James and Rebecca were about 17yrs of age when they were married. Rebecca was born in June 1839 and James September 1839 making Rebecca three months older than James.